Product may not be an exact match for your search 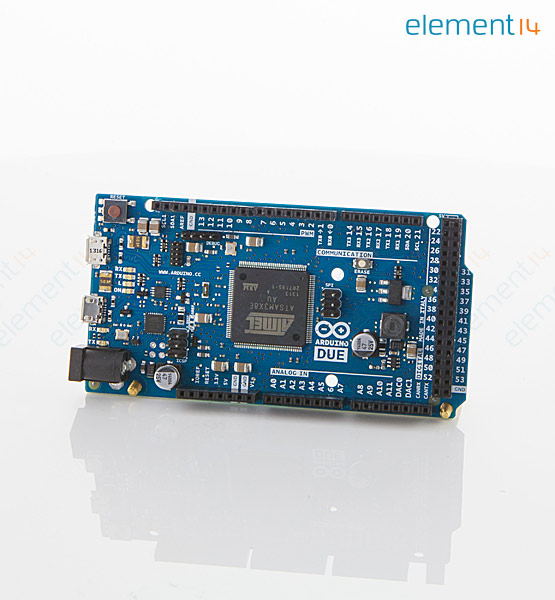 The A000062 is an Arduino Due development board based on the AT91SAM3X8E ARM Cortex-M3 microcontroller. It is the first Arduino board based on a 32bit ARM core microcontroller. It has 54 digital input/output pins (of which 12 can be used as PWM outputs), 12 analogue inputs, 4 UARTs (hardware serial ports), a 84MHz clock, an USB OTG capable connection, two DAC (digital to analogue), two TWI, a power jack, an SPI header, a JTAG header, a reset button and an erase button. The board contains everything needed to support the microcontroller, simply connect it to a computer with a micro USB cable or power it with a AC to DC adapter or battery to get started. The Due is compatible with all Arduino shields that work at 3.3V and are compliant with the 1.0 Arduino pinout. The Arduino Due can be powered via the USB connector or with an external power supply. The power source is selected automatically.

The Arduino Due board runs at 3.3V. The maximum voltage that the I/O pins can tolerate is 3.3V. Providing higher voltages, like 5V to an I/O pin could damage the board.

You can reserve stock now just order your desired quantity and checkout as normal. The quantity that cant be dispatched now will be placed on back order and sent as soon as we get a delivery from our supplier. You only get charged when the products are dispatched to you.

Enter Your Part No/Line Note
Add your own part number/reference to each product. This number will be added to the Order Confirmation, Invoice, Dispatch note, Web confirmation Email and Product Label
Lines note are comments you can add to each line of your order. Your line note will appear next to that product in your Order Confirmation, Invoice and Dispatch note. Your line note will last for the lifetime of the order only.
Add to Favourites
Cancel
Total Price:
Total Price: ( )
Total Price: --